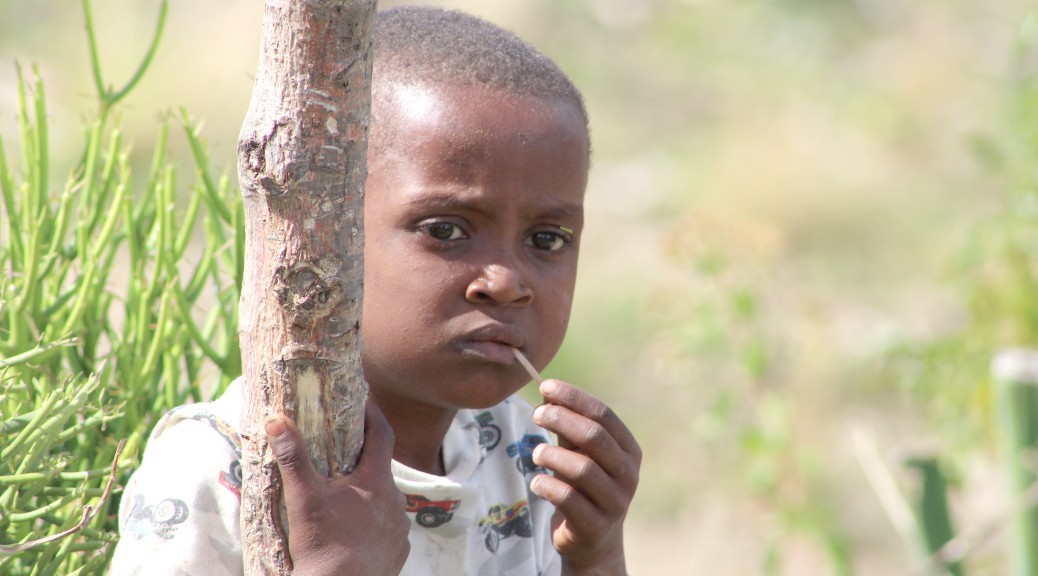 “This week, I witnessed what happens when the body of Christ sees not numbers, but souls!” exclaimed Grace, one of Mission of Hope’s HaitiOne staff members. Mission of Hope serves as Food Aid’s primary distribution partner in Haiti, a nation struck by desperation, poverty, and starvation. An orphanage not yet in the HaitiOne program had been visited the day before by the mobile medical team, and the team had presented Grace with some disturbing numbers.

63% of the children were in the bottom 5th percentile for height and weight.

14% were suffering from moderate to severe malnutrition.

The children were eating only 2 or 3 times a week.

Grace understands numbers. She operates in numbers. Every orphanage and school in the Haiti One program is assigned a Program Center Identification number. Every child measured has a corresponding Child Feeding Participant number. GPS coordinates, anthropometric measurements, “effective” enrollments (which dictate how much food is distributed each month), all numbers.  But on this visit, God took Grace out of the world of her numbers and revealed to her that behind each of those numbers is also a soul living in an orphanage. A soul that someday hopefully will have an assigned Program Center ID number.  Grace described her trip back to the orphanage the following day.

“Geraldine (a fellow staff member) and I joined the Mobile Medical team the very next day to visit the orphanage. The team did not return for medical reasons specifically.  Rather, the team returned simply out of love. I watched in awe as doctors, translators, North American staff, and two young children of North American doctors visiting for the week all just literally poured out love.  I saw zero concern for themselves from translators and drivers who knew that an extra trip would mean an extra long workday in what had already been an extra long week. I saw each person see a soul, and not a number, and it was beautiful.

I do not know what will happen, but I trust God’s sovereign plan. I am thankful for the reminder and for the opportunity to see ‘ordinary people,’ Haitians and Americans alike, display His love in extraordinary ways.”

Through partners like Food Aid International, the MOH nutrition program has provided over 15 million meals so far this year, feeding over 90,000 children per day through the HaitiOne network.  But over 83,000 children, like the children of this orphanage, are still on a waiting list to be served.  The need is great as evidenced above. Your partnership and support is reaching those numbers and changing them on a daily basis!  Thank you for being part of God’s plan to reach the souls behind the numbers. 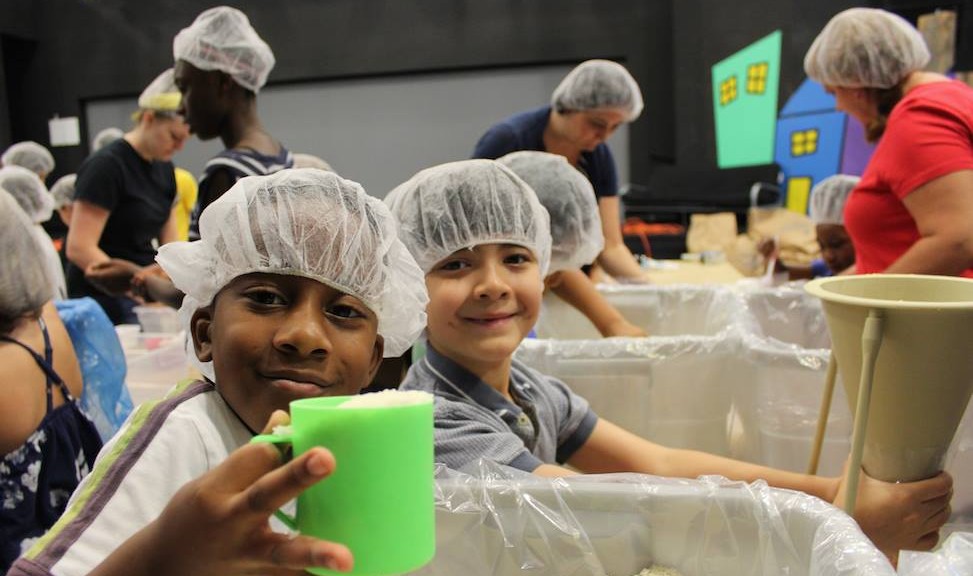 A FBC Snellville fourth-grader was interviewed after helping pack over 30,000 meals at their VBS program. We compiled their thoughts and comments into a blog post from their perspective!

On Monday I did Food Aid at VBS, and I had lots of fun! At the beginning of it Mr. Chris went on stage and talked to us. He asked who had breakfast and I said I did, and so did everyone. Then he asked us all to shout out what we had, I said I had eggs but I don’t think he heard me because there were lots of us.

Then they showed a video about the Food Aid and about how important it is, and they showed a video that taught us how to pack meals. They gave us all hairnets, which was funny, but it was because they needed to make sure our hair didn’t get in the food, but they were hard for me to put on!

We all got into lines to package food, and I had lots of friends with me, and we had so much fun! On the line with my friends I got to weigh the bags to see how much they were, because they had to be specific. My table packed so many meals, like at least 100! (in reality, her table packed ten times this!) It was lots of fun, but we also learned a lot. We learned about how we need to help others, and helping others with Food Aid made me feel really good. It’s sad that tons of kids don’t have enough to eat. But it was nice to know we were helping them have food to eat.

Mr. Chris said that because of all the food that we packed, like 80 kids will have food to eat for a whole year! (85!) That’s a lot of kids! I had so much fun that after VBS was done they were still packaging so I came back to pack even more! I hope that we get to do Food Aid again next year, it was fun and taught me a lot. If I could say anything to the orphans that will get the food, I would say “I hope you enjoy your meals!”

Food Aid International is excited to partner with AtlantaFest when it returns summer of 2016.

The oldest and largest Christian music festival in the South is back – and better than ever! Celebrating its 30th anniversary, AtlantaFest will feature a jaw-dropping lineup that is sure to make a splash in the Christian music industry! And here at Food Aid International, we are ecstatic – we have been blessed with the opportunity to serve as the festival’s humanitarian partner.

AtlantaFest is excited to raise awareness for arguably the world’s most pressing issue – malnutrition – and we’re excited partner with them on this effort! To maximize the impact both in the greater Atlanta area, as well as around the world, hunger awareness will be emphasized on all three days of the star-studded festival. AtlantaFest is also excited to actually host meal-packaging, and is planning to partner with our Haitian distribution arm, Mission of Hope Haiti.

Just two weeks ago, Food Aid International partnered with ResoundFest, another Christian music festival, in packing meals for Mission of Hope. The festival attendees packed over 10,000 meals; after seeing what a success it was, ResoundFest is excited to pack many more meals in upcoming years.

Food Aid International is excited to expand our festival partnerships, and we will keep you posted along the way! 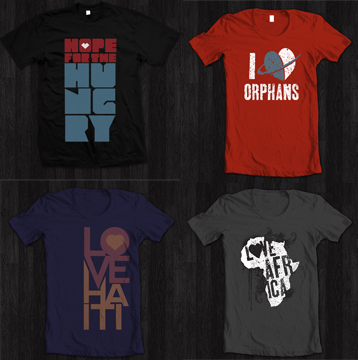 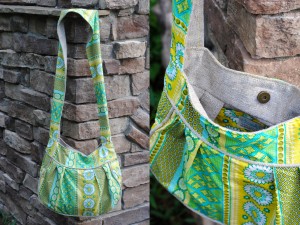 d Aid International launched its web-store – iHeartOrphans.org – almost two years ago. Since then, it has provided its customers with exclusive quality merchandise, and food for starving children around the world. Every item purchased through the site helps fund and deliver malnutrition-fighting meals to our overseas partners.

iHeartOrphans.org features exclusive Food Aid International t-shirts, including our “Hope for the Hungry”, “Love Africa”, “Love Haiti”, and “I Heart Orphans” shirts. With every t-shirt purchase, 40 meals are provided for hungry families. Not only are you supporting the funding of meals with your purchase, you’re also spreading awareness about the world hunger epidemic simply by wearing your shirt, on which the back reads, “This Shirt Fed 40 People.”

The web-store also features a variety of fair-trade, handcrafted purses made by women rescued from tent cities in Haiti. These cute, funky and trendy purses are available from two collections – Soleil and Zizi. We offer a number of accessory items, including clutches and head bands/wraps as well. All proceeds from our handcrafted purse and accessory collections provide meals for children in Haiti through Mission of Hope.

Food Aid International has provided thousands of meals to children around the world through iHeartOrphans.org. Head over and check it out today! Thank you for your partnership in providing Hope for the Hungry! 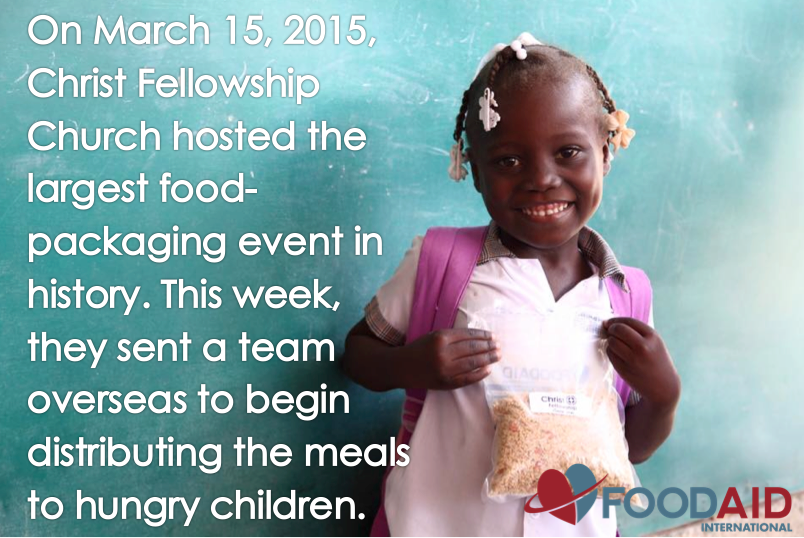 It was the largest volunteer base for a single event that food packaging had ever seen. Through twenty-six shifts across seven campuses in two different states, the Christ Fellowship Church (CFC) congregation came together with a common goal – to directly impact lives around the world; to provide hope for the hungry.

Over 15,000 individuals sacrificed their Sunday afternoons for the project, enthusiastically packing meal after meal until their goal was met. All of their hard work is now beginning to pay off, as their first team is now overseas to begin delivering the 292,000 meals that they had packaged.

The children receive medical care, education, housing, and water, but the home had a need for more food. In an effort to help meet this need, CFC and Food Aid graciously took this opportunity to join their mission.

The CFC mission team has taken part in both the packing of the meals domestically, and now also the overseas delivery to the children themselves. They are excited with the opportunity they have been blessed with – not just taking meals, but taking hope to the hungry.

You too can join the mission of fighting world hunger. Everyone can be a part of the solution: young and old, rich and poor – there’s nobody that can’t join our effort. When people around the world are starving, we don’t have the luxury of time, and we don’t have the comfort of assuming someone else will feed these children. Children are starving, children are dying, and we can all join to combat this issue. Whether you’re part of a church or organization that would like to host an event; whether you’re an individual able to make a donation to Food Aid’s efforts; whether you’re someone who’s just looking to help us spread the word or share our mission, anyone and everyone has a role to play in putting an end to world hunger.